People in tech circles are increasingly moving towards self hosting and I believe this trend is going to catch on with general population as both hardware and Software continues to evolve. This evolution has already reached to a point where a layman with few hours to spare can self host alernative to most of popular cloud based applications. In this blog post I am going to show you the hardware that I have used for low cost server setup at my home.

You can use old PC/laptop as server for your home in which case you don’t even have to buy anything but I would recommend that you use RPi instead. There are quite a few advantages if you go the RPi route

We want our server to run 24x71 and the power consumption adds up over time so it is an important factor while choosing the hardware for our server. RPi will cost you once in beginning but its going to save you lot of money in the long run.

Raspberry Pi runs of a memory card which is suitable for its booting but not for any long term storage. You can connect an external HDD to your Pi and be done with it but there are few disavantages to this approach:

After careful consideration of many HDD connectivity solutions I came to conclusion that PiBox dock is best hardware for our low cost server. It can suspend the drive when not in use. It supports both 3.5/2.5 inch HDD and has USB3.0 interface. I have chosen Seagate Barracuda 3.5 inch HDD for my requirement. Another advantage of going with internal HDD is that they are cheaper as compared to their external counterpart. Regarding heat dissipation, since our drive is internal and docked there is no need for additional heat dissipation. I have checked temperatures and they are well within operating range of HDD. Ideally we should be using an enclosure with fans but that goes way over the budget for the low cost server that we want to build.

It costs little below INR 10,000 but if you compared this to the NAS solutions that are available in market this is pretty low cost. Not to mention its robust as well. I have been streaming 4K content, hosting an alternative to Google Photos and also a document server capable of running OCR on incoming documents but Raspberry Pi hardly breaks a sweat2. It’s a tiny little beast. In my next post I will show you the kind of applications that I am self hosting at home. So stay tuned. 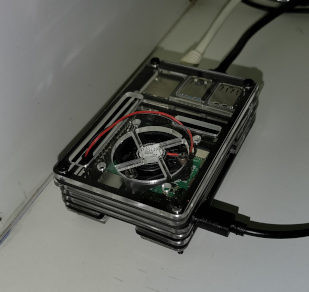